Experiences in Brazil and Abroad:
Costa cruzeiro November 2017 to March 2018
Shangrila hotel (China) singer , February 2017 to September 2017
Andaz hotel (Shanghai China) asa siruer, August 2016 to January 2017.
Latina restaurant (China) as a Singer, November 2015 to August 2016,
Before that, Igot a 3 years contract with the Kim of Party (night club), as one of the simers.
The Previews one, 6 months Shanhaiguan (China) as Singer and Dancer.
Two contracts workim as Singer and Dancer to Happy Cruises, performing on board
Gemini and Happy Dolphin from October (2010) until May (2011) - Grand Cayman, Cuba,
Mexico, from July (2011) until January (2012)-Italy,Turkey, Greece, Croatia.
Working as a dancer and Entertainer to Star Cruises, performing on board Super
Star Libra lrom June (2009) until March (2010)-Malaysia, Thailand, Simapore, Taiwan, Japan.
Singing with the "Seventy Company" (band) for 6 years (2003) until (2009),
Four years dancing to the "ballet da cidade de 550 Jose do Rio Preto" Company, performing a mixed Contemporary and Modern-(2004) until (2008).
Singiru with the "banda Cruzeiro do Sul"(band) for 2 years (2001) until (2003)
Dancing and Performing with the Brazilian Popular Ballet Company in most of the
Great Theaters and Public Spaces of Mainland China, including Beijing, Hanzhou,
ChangChun (Movie Wonderland), Wuhan, and Xiamen, from July until January
(2006/2007)-supervision of Leandro Patricio dos Santos; Have presented and Worked to "Fowl Holiday Camping" (Lido dl Fondl, Lazlo-Italy) as Entertainer under the most extended ways, dolru all kinds of shows and General. 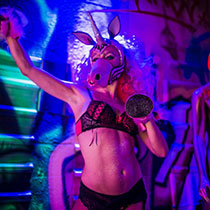