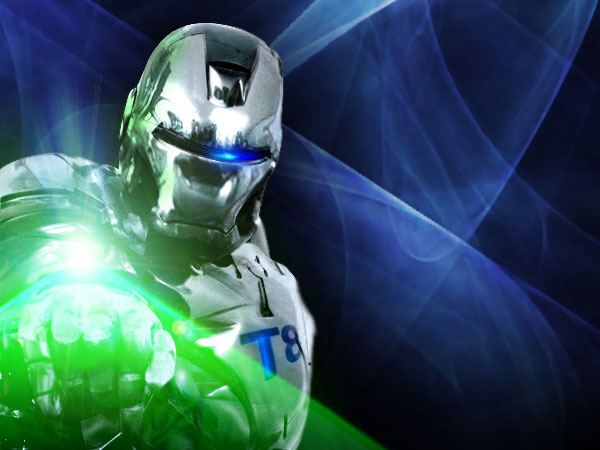 Make your, ‘Show’ Even more explosive, something no one will ever forget!
The most famous Robot in the world, Laser Robot, Terminator’ was just the beginning.
Originally the 8th in the ‘Terminator’ series, this Laser Robot Cyber Robot has been
de-commissioned and is now safe to have at your event/venue.
(Well it’s a 99% guarantee!)

6 Feet of Chromed Steel, Burning Nuclear Blue Vision staring at YOU!
And the finale of 2 lasers creating tunnel effects from ‘Laser Robot’s Arms, then ‘Laser Robot’ Using them to explode confetti filled balloons (In the roof) usually send the audience into a frenzy! This has to be seen to be believed!!

‘Laser Robot’ was most honoured to have a command performance for HRH Princess Anne & her family at, ‘The Royal Variety Show’ in UK. (TV Audience – 18 million!)

Covent Garden in the centre of London was brought to a standstill by ‘Laser Robot’ and this is what happens every time he appears. Your guests will be amazed entertained and scared all at the same time!

‘Laser Robot’ can be as passive as a statue to promote your function/event, he can be helpful, charming, cheeky or he can rampage around scaring the living daylights out of everyone, its up to you to decide?!
Equally impressive at Dance Events, Nightclubs and Trade fairs, Festivals, Exhibitions, Shopping Malls, Product launches, Corporate events, even weddings!!
‘Laser Robot’ is fully autonomous and reacts there and then to what is going on around it, usually with hilarious results!
‘Laser Robot’ Can walk up & down stairs, Spin, Moonwalk, Dance, and…. Well wait and see for yourself! ‘Laser Robot’ performs in most weather. (Tornado’s can be troublesome though!)

‘Laser Robot’ Can perform anywhere.
Ideally a large stage is perfect however ‘Laser Robot’ has performed on board ship’s and on the back of a flatbed truck, so have no fear, ‘Laser Robot’ goes anywhere!

In the interest of safety both for the public and ‘Laser Robot’, it is advisable to have security around as people do get over exited and like to get very close to ‘Laser Robot’. As the client, you are responsible for damages to the costume and as it is valued at over 7000 GBP, security is advisable.
‘Laser Robot’ will perform anywhere in the world!