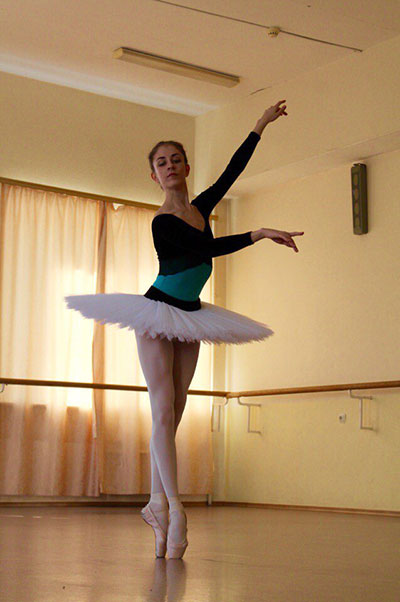 From 2007 to 2011 I studied at ballet School in Kiev municipal Ukrainian academy of dance named after Serge Lifar.

In 2011 I was graduated in Lyceum of the International Relations No.51 of the city Kiev and came to the Kiev municipal Ukrainian academy of dance named after Serge Lifar.

During study I was involved in many concerts and ballet performances

In 2013 I passed summer training in Covent Garden Royal Ballet school in London.

In 2015 I passed spring training in the French school of the ballet in Cannes.

In 2015 I took part in ballets, and also in the dancing project of Mark Bogarts "Venice city of hopes".

In 2015 I finished the training in the Kiev municipal academy of dance of Serge Lifar, and gained the diploma of the junior expert, ballet dancer, and teacher of ballet.

Since March 30, 2015 I work in the Russian Classical Ballet company as a ballet dancer.

I was on tours with ballets "Clown", "Don Juan" in the Czech Republic, in America and Canada with ballets "Swan Lake", "Sleeping Beauty", "Romeo and Juliette", "Nutcracker".